Among dedicated whisky/whiskey drinkers it is customary to add a little water as this “helps to unlock and release the esters, or flavours, from the fats”. Another site claims that dilution helps “breaking down the ester chains and freeing the volatile aromatics”. Does this make sense from a chemical perspective?

When Erik posted me a question some months ago about why we add water to whisky and the chemistry that is involved, I started to speculate about possible mechanisms and discussed them with Erik. Perhaps the most obvious effect is that the alcohol concentration is lowered. High alcohol concentrations anaesthetises the nose and sears the tongue (as the site metioned above correctly states). This is especially true for cask strength whisky which can exceed 60% ethanol. We considered the possibility of a temperature effect. The obvious effect could be achieved by adding water with a different temperature to either cool or warm the whisky. The less obvious effect could be due to a possible release of heat when adding water to a concentrated ethanol solution. Having thought about the different possibilities I did a search and found a very fascinating article: “Release of distillate flavour compounds in Scotch malt whisky”. It was published in 1999, but was new to me and gave me some totally new perspectives on whisky and water. When reading the article, it seems to me that the motivation for adding water to whisky is in fact to mask some aromas and release others!

Malt whisky contains high concentrations of esters and alcohols with long hydrocarbon chains. When water is added, the solubility of these esters and alcohols decreases, and a supersaturated solution results. In extreme cases, the decreased solubility of fat-soluble, volatile organic compounds can lead to clouding due to precipitation of small droplets as seen with anise/liquorise liqours such as Pastis, Pernod, Arak, Raki, Sambuca, Ouzo… (I think I’ll post about that later some time). This can also occur with whiskys that haven’t been chill-filtered. But even in whisky that has been filtered at low temperature a form of “invisible” clouding will occur. The excess of esters and alcohols in the diluted whisky form aggregates (or micelles) which can incorporate esters, alcohols and aldehydes with shorter hydrocarbon chains. Once these compounds are trapped in the aggregates, surrounded by longer chain esters and alcohols, they smell much less since they have a harder time escaping from the liquid! Fortunately, some of the compounds that are trapped have less desireable aromas described as oily, soapy and grassy. So far I’ve only discussed the aggregates formed by long chain esters. But studies have shown that when an aqueous solution contains more than 20% ethanol, the ethanol molecules aggregate to form micelles, just like the long chain esters do. These micelles can also trap flavour compounds. Unlike the micelles formed by the long chain esters however, the ethanol micelles break up when diluting the whisky, thus releaseing the entrapped flavour compounds. It is interesting to note that ethanol is less “soluble” in water at high temperatures (ie. the solution is no longer monodisperse). As a consequence, serving whisky “on the rocks” will actually promote the release of flavour compounds from the ethanol micelles. As Mirko Junge commented below, this is one of the very few cases where cooling actually enhances flavour! But the wood extracts found in whisky matured in oak casks supports the formation of ethanol micelles, so as Mirko Junge points out, matured whisky needs more dilution and/or cooling since there are more ethanol micelles. The over-all effect is a fractionation of volatile compounds upon dilution with water: water insoluble compounds are concentrated in the aggregates (or micelles) of long chain esters, water soluble compounds remain in solution and compounds (probably those which are slightly soluble in water) that were originally trapped in ethanol micelles are liberated.

So after all, the popular notion that addition of water “opens up” the aroma of a whisky is true, but who would have thought that the effect is a combination of “masking” (inclusion of some arome compounds in long chain ester micelles) and “demasking” (opening up of ethanol micelles) and that there even is a temperature effect? 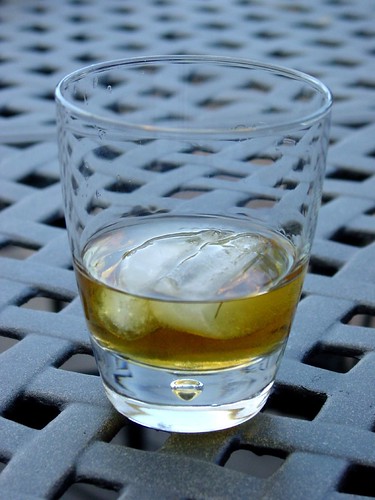 Serving whisky “on the rocks” helps break down ethanol micelles due to the combined effect of cooling and dilution. (Photo by Generation X-Ray at flickr.com)

Feel free to share your experiences with whisky dilution in the comments section below!

(Note: The text has been revised and expanded on June 3rd following the discussion below. Special thanks to Mirko Junge for his valuable comments and for pointing out the importance of the ethanol micelles.)