Were you told by your mom to chew each mouthful 20 or 32 times before swallowing? Her rationale was perhaps to prevent you from choking. But it turns out there is a link between chewing (or mastication) and release of aroma molecules. A group of French researchers have studied model cheese systems with varying hardness (J. Agric. Food Chem., 2007, 3066, 10.1021/jf0633793). Their key finding was that in hard cheese, more aroma is released, and it happens at a faster rate than in softer cheeses. It is slightly counter intuitive, because one would expect that volatile aroma molecules would have a harder time escaping from a hard surface than from a soft surface. The reason however is that when chewing a hard cheese our chewing pattern automatically adopts and we chew more intensely. Furthermore a hard cheese will break down into several pieces when chewed, resulting in a greater surface area from which the aroma components can escape into the air. 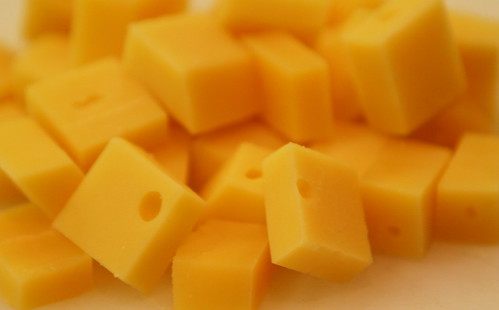 (Photo by kurafire at flickr.com)